Dozens of Web companies and advocacy groups, including Reddit, Netflix Inc. and Upworthy, are planning an online protest Wednesday to urge regulators to ban any fast lanes on the Internet.

The protesters plan to place a spinning-wheel icon on their websites to convey their view that the Internet would function slowly if regulators let broadband providers privilege some content at others’ expense.

The icons wouldn’t actually slow down the websites, but if clicked they would link to a website where users can take action on the issue.

The protest could ultimately include thousands of websites and is designed to mirror a 2011 effort in which an online protest strategy was used to scuttle the Stop Online Piracy Act, or SOPA, which would have significantly enhanced online copyright protections. A coalition of Web companies, nonprofits and activists banded together to oppose the bill, which was backed by the entertainment and retail industries.

This time organizers including the groups Free Press, Fight for the Future and Demand Progress are protesting Federal Communications Commission Chairman Tom Wheeler’s proposed rules for how broadband providers must treat content traveling over their networks. The rules would ban broadband providers from blocking or slowing down specific websites but open the door for content companies to pay for special access to consumers, such as faster lanes. 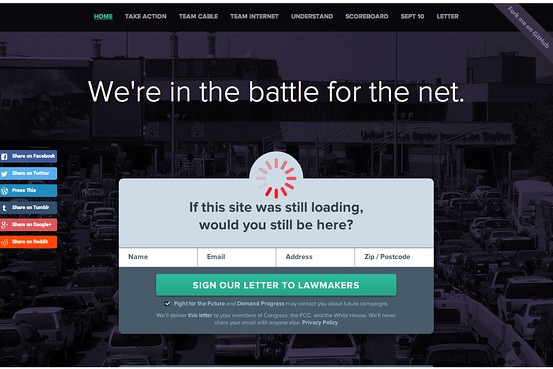 A screenshot of the protest site that some websites are sending users on Wednesday.  www.battleforthenet.com

Since it was unveiled, Mr. Wheeler’s proposal has drawn a fierce backlash from proponents of net neutrality, the principle that all Internet traffic should be treated equally. Net neutrality supporters have flooded the FCC this summer with more than 1.2 million comments slamming the proposal, and the goal of Wednesday’s protest is to drive that message home at both the FCC and among members of Congress.

“Consumers, not broadband gatekeepers, should pick the winners and losers on the Internet,” a Netflix spokesman said. “Strong net neutrality rules are needed to stop Internet service providers from demanding extra fees or slowing delivery of content to consumers who already have paid for Internet access.”

Tim Karr, senior director of strategy at Free Press, said the organizers started by recruiting other advocacy organizations active on net neutrality, then went after tech companies like Vimeo and Kickstarter. Their goal is to drive more members of the public to submit comments to the FCC or call their members of Congress and express support for net neutrality. For many of the protesters, the best way for the FCC to achieve that goal is to reclassify broadband as a telecommunications service under communications law, which would subject it to utility-like regulations. Some liberal Democrats, including House Minority Leader Nancy Pelosi of California, have backed that approach.

Some of the larger Web companies haven’t said whether they will actively participate in the protest and so far are using their trade group, the Internet Association, to make their views known. The group has called for net neutrality rules on both wired and wireless networks. Privately the firms say they are wary of having to run any new online business models past the broadband providers, and they have left most of the action on this front to the Internet Association. Google, for example, may use its policy website to express its views, said a person familiar with the company’s strategy.

A spokeswoman for Facebook Inc.  said that while the company isn’t putting the Internet slowdown widget on its website, it supports net neutrality principles. “We urge the FCC to adopt enforceable rules against paid prioritization or the creation of Internet fast lanes so that the Internet remains an open platform for speech and commerce,” the Facebook spokeswoman said.

Denelle Dixon-Thayer, an official at Mozilla, said she doesn’t think the protest will be weakened if big Web companies don’t participate as actively as smaller ones. “All of us have something at stake here for our users,” she said.

People in Silicon Valley have debated whether the big Web companies such as Google and Facebook have less incentive to push for all Internet traffic to be treated equally because they can afford to pay Internet providers for speedier access to their services. Ms. Dixon-Thayer disputed that assessment. “Yes, there are companies out there that will be able to pay tolls. It doesn’t mean that they want to,” she said. 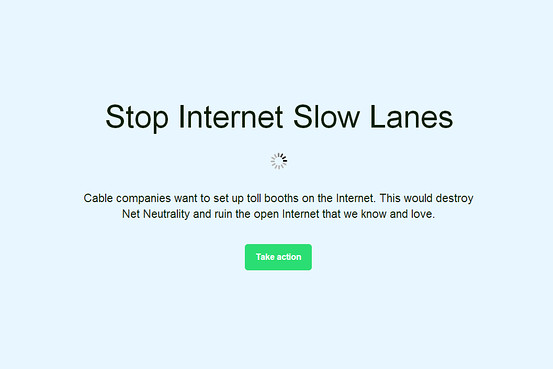 Kickstarter posted a protest message on its homepage. Kickstarter

Broadband providers have said they can live with net neutrality regulations and expressed support for Mr. Wheeler’s proposed rules. But they have argued that reclassifying broadband and subjecting it to greater regulation would curtail investment and innovation in the industry. On Tuesday, 30 tech manufacturers including International Business Machines Corp. and Intel Corp.  wrote to Commerce Secretary Penny Pritzker warning that reclassification would dampen spending on Internet infrastructure and reduce demand for their products.

While net neutrality remains under the radar for most Americans, the million-plus comments at the FCC show the issue can arouse passions when explained to the public, particularly among Internet users. An HBO segment by comedian John Oliver on the issue earlier this year prompted so many comments it crashed the FCC’s website. Mr. Karr said the protest organizers are hoping to elicit a similar level of response on Wednesday.

While the active participation of sites like reddit suggests the protest could achieve that goal, moving regulators will be more difficult. Undercutting the arguments of the net neutrality advocates is the divergence among their own views. Some favor net neutrality rules for both wired and wireless networks, while others approve letting the FCC exempt the latter, as it did in 2010.

There is also significant disagreement about whether reclassifying broadband as a utility is necessary to ban special deals like fast lanes. In addition, some companies like Netflix want the rules to cover back-end interconnection between broadband providers and content companies, known as peering.